Fifteen Ways to Draw a Line

All Processing code for this article, along with images, can be found on Github

I set three constraints for this challenge. As before, my first constraint was to forego the use of color so that I could focus on forms and shapes instead.

Second, each version should be implemented as an independent, re-usable function conforming to the following declaration:

This way, I can easily reuse them later for other works. Above, you’ll see that I specify two additional parameters: a stroke weight and a value (or lightness/darkness).

As the third and final constraint, each version had to have some generative/procedural component to it. That is, each time the function is called, a new variant should be generated.

I started with a basic formatting of different weights and values that I was looking for and went with the simplest possible line. Below, the stroke weight increases from left to right, and the values get lighter from top to bottom: 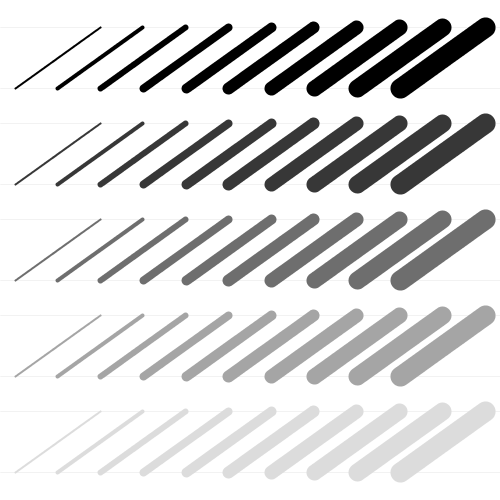 My immediate next urge was to form the line thickness from multiple thinner lines. The endcaps of the line can be seen as a circle of diameter specified by weight. I generated a random point inside the circle around the first endpoint and another around the second, and connect them with a line whose color is based on the specified value: 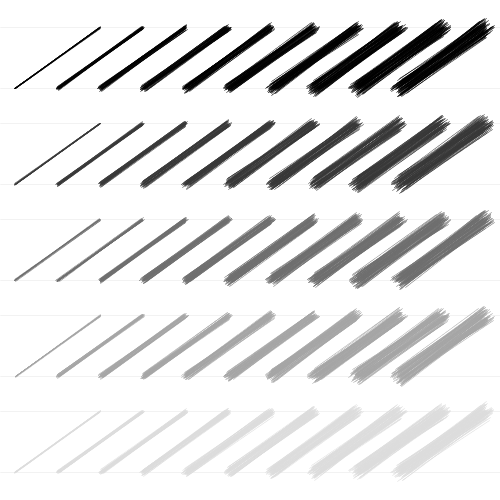 Instead of drawing complete lines, I instead sampled a few points on the line instead and drew small ellipses (with the required opacity to get the correct value): 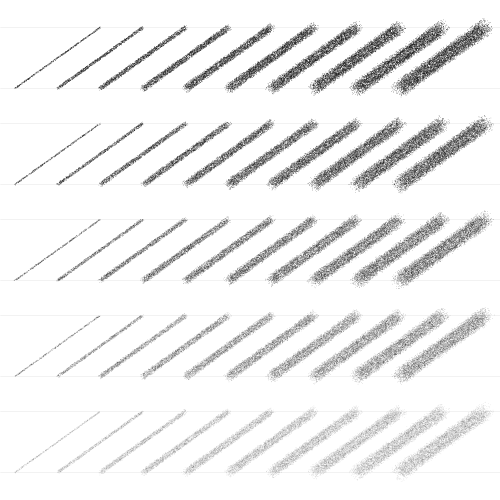 I wanted to try and see if I could use a solid black fill for the ellipses and vary the value using just the density of the sampling itself, and it seems to work quite well: 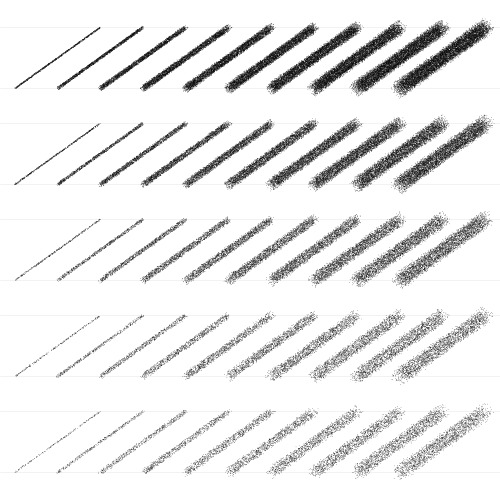 I decided to switch gears a bit and, after generating a few random points inside the line shape, created a Delaunay diagram (using Lee Byron’s fantastic Mesh library for Processing. The value was determined by the lightness of the lines: 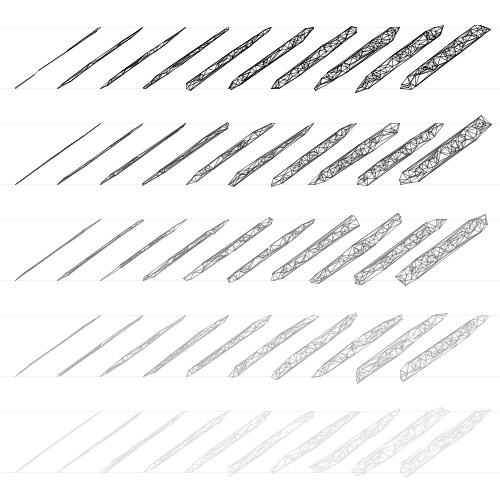 Since I was using the Mesh library anyway, I figured I would also try to do just a convex hull of the randomly-generated points. This gives an interesting brush-like shape: 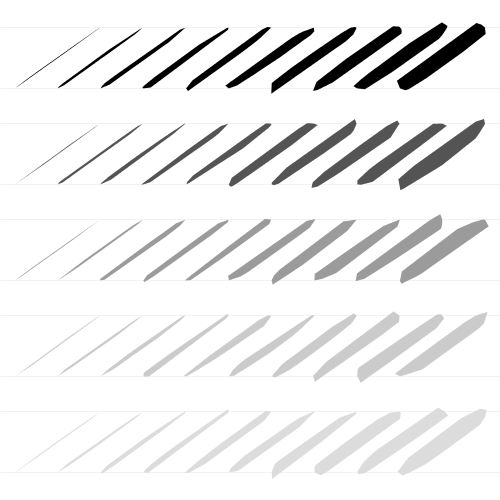 At this point I wanted to try a variation of a previous sketch: instead of generating random lines ending near the endpoints of our line, I wanted to generate them anywhere within the line’s shape. The result was subtly different, but the different was not particularly discernible: 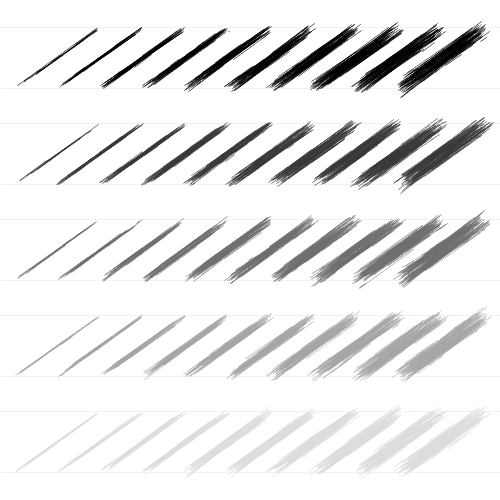 Since I was generating random points along the shape of the line anyway, I figured I’d just draw some ellipses instead. I use random diameters based on the specified weight, but this is the first one where I start drawing outside the bounds of the original shape: 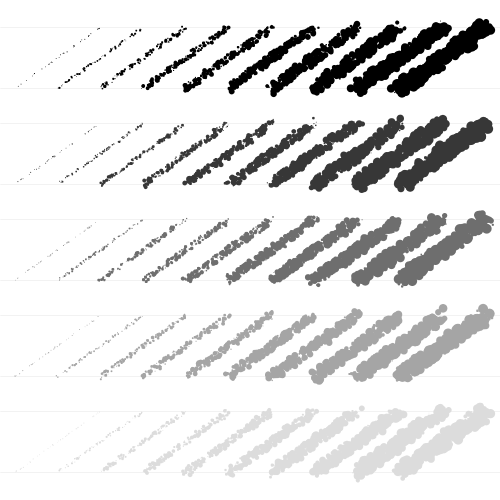 In the next one, I removed the fill and used just a thin outline stroke. Tip: you can specify fractional stroke weights in Processing to get thinner lines (e.g. strokeWeight(0.5)) 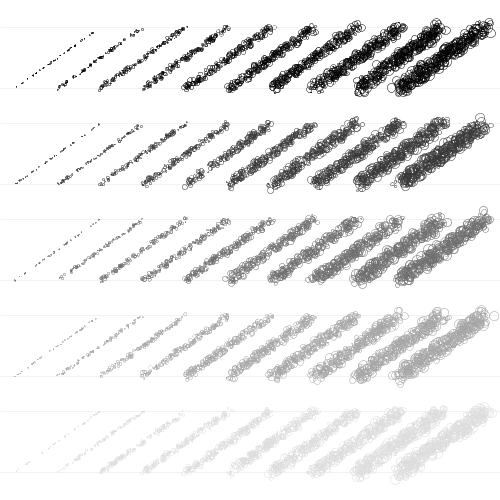 Rather than generating ellipses with random positions and diameters, I decided to generate them on the original line with a random diameter up to the specified stroke weight: 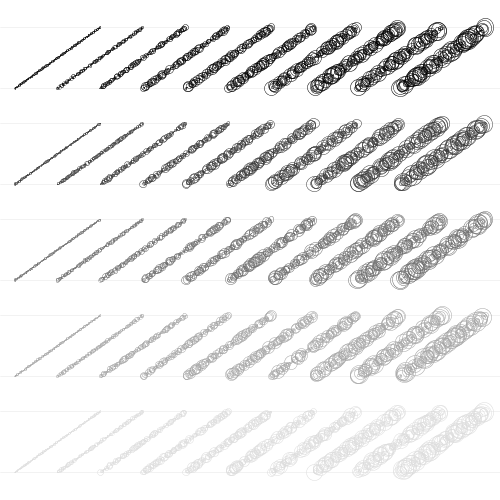 This time I went from the stroke-only version to the filled version because I had just done that variation betweween #8 and #9: 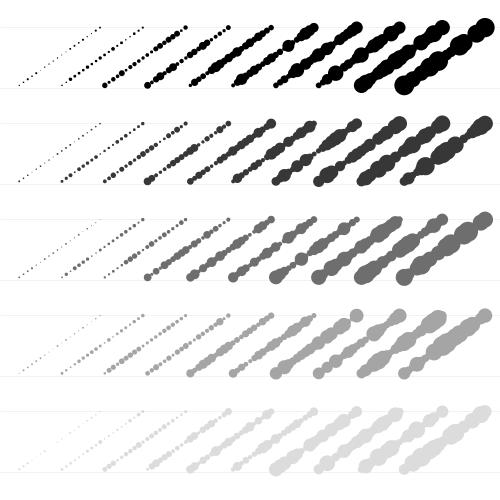 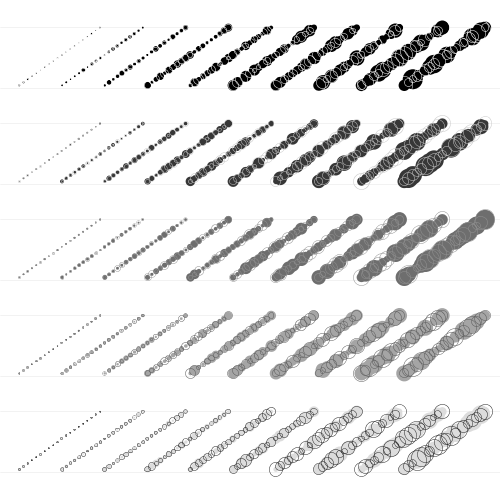 I moved on to implement a simple walker that walks along the line with random shifts in its position. I overlaid a bunch of these to get the next iteration: 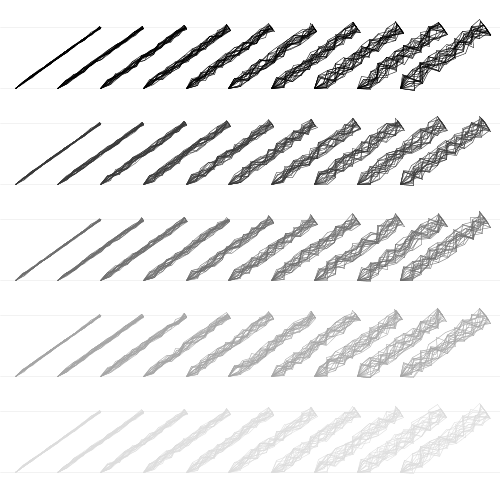 I then reduced the step size to a very small amount to get a perpendicular scribble, and drew just a single walk from endpoint to enpoint with random variations based on the specified stroke weight: 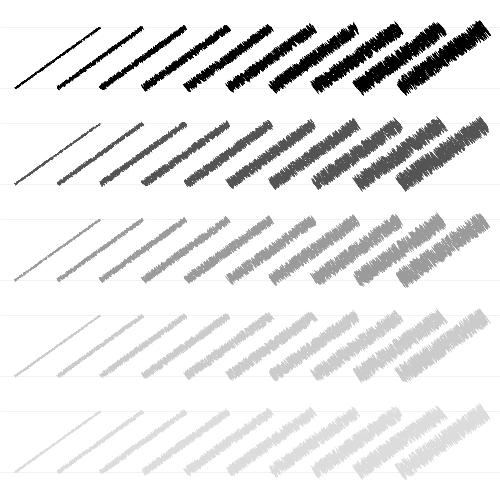 And finally, I decided to use a closed shape instead of an open one, allowing for filling in the parts that jut out of the original line: 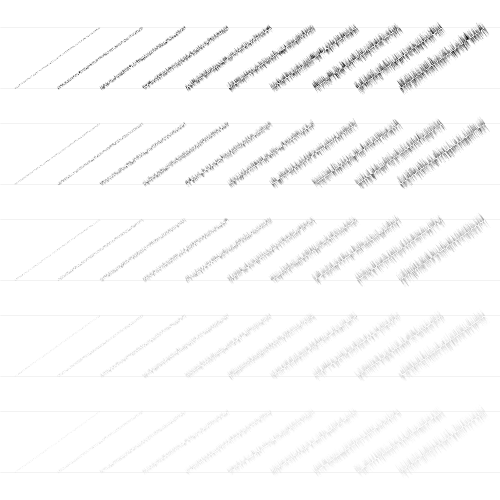 I suspect I could push this exercise pretty far if I wanted to, but I’ll stop: I’m already glad to have fifteen interesting line variations to play around with in future sketches!